The idea of playing with a dreamlands setting has been lurking in my unconsciousness for a little while now. I was just not cognizant of it. Looking back on it, I realize that my experiment with the October Country was this idea bobbing briefly to the surface. It took my recent rereading of Leiber to crystallize this vision by way of my reintroduction to Lankhmar.

To reacquaint myself with Fafhrd’s and the Mouser’s stomping grounds, I pulled my copy of Lankhmar – City of Adventure off of the bookshelf. In addition to being reminded of what a spectacular piece of gaming material that book is, I rediscovered the geomorph system it uses to assist the referee in customizing his or her Lankhmar. Seeing those geomorphs was like brushing clear the tiniest corner of a buried artifact. The more I brushed away, the larger that particular potsherd grew until I found myself staring at the nascent dreamlands idea fully revealed.

I like fantasy cities, but I’ve found that the initial effort to create them is often not worth the reward of using them in play. Unless the campaign is specifically urban-centered, the PCs tend to shuffle off before even a small fraction of the city is explored. But since the referee cannot predict how long they’ll remain in the city or where they might go, he has to do a lot of mapping and prep work just to be safe (although Santiago has demonstrated this need not be the case).

Unlike a “normal” fantasy city, a dreamlands’ metropolis wouldn’t have to be fully mapped out. The mutability of dreams makes it feasible to play fast and loose with both the layout of the city and what is found along those streets. I could mimic the unpredictability and the lack of consistent internal logic by using geomorphs and random tables to determine the overall look and contents of my hypothetical city. Even the boundaries of the city would be in flux initially. A character climbing to the rooftops could look out over the city skyline and see the high walls that surround it, but any attempt to reach those walls would result in him not getting any closer or finding something that bars his way.

Neighborhoods could change on a whim and heading east along the Maiden’s Amble might not always result in arriving at the Court of Silver Fire. Finding that music shop where you bought that violin might become impossible as you vainly search for the dim alley that the store was located along. At least, at first.

I’m still turning the idea of the characters as recent arrivals to the dreamlands over in my head, but the more I do, the more it seems right to me. As recent arrivals, the city remains mutable, lacking any concrete structure outside of the initial arrival neighborhood. To venture out from there, the party must either rely on luck or the assistance of natives and/or public transportation. But as they spend more time in the city, thing seem to solidify and their area of stability grows to include more and more neighborhoods (and thus, more geomorphs). This is where my belief in a shared world comes into play.

As the city solidifies, the players can determine what the next neighborhood is based on what areas they’ve enjoyed the most in their explorations. Like the river district? It now lies directly to the west of the beginning neighborhood. The temple district was fun? It’s now directly to the north. The reason it seemed further away previously need not be explained; it’s all a dream world.

I realize that this concept of the fluctuating city may stink a bit of the railroad, but I’ve got a plan to address that, which I’ll cover that in another post. In the meanwhile, let’s take a look at the first geomorph in its basic form. I’ll be using this as the demonstration model in later posts to help elaborate on my scheme and to test some of the random table ideas in action. If it strikes anyone as being derivative of the Lankhmar geomorphs, this is because I used their layout as a starting point. Future geomorphs may undergo a change, but this will serve for now. 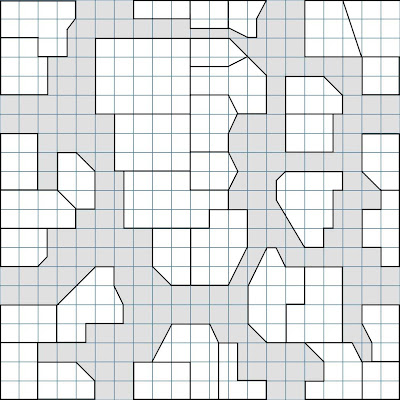 Later this week, I’ll talk more about the city, its purpose, and the influences I’m drawing from to piece it together.
Posted by Michael Curtis at 9:01 AM

1. I love the geomorphs - one of the top reasons that I still place the 1st edition Lankhmar book as #1 in my list of 5 Fantasy City Supplements You Need

2. I love the mutable dreamland. The idea that places you travel to all the time become closer to you makes a lot of "sense". In a regular RPG you would just start skipping over the intervening areas as the character(s) travel to location X, but this way they are ALSO actually physically skipping over the intervening areas as the city reshuffles to suit their patterns of activity and focus.

Funny - I just finished building a fantasy city (well, the central portion of a city) with those geomorphs. I put together 9 tiles into a square and then randomized quite a bit about the inhabitants of the different buildings. I was able to print the map at 2'x2', so the players were impressed and enjoyed adventuring there.

Neat. I found this http://www.geocities.com/Area51/8306/lankhmargeomorphs.html

Thanks to another earlier post of yours, I have tracked down a copy of the Lankhmar novels and been enjoying the read quite a bit. In doing so it reminded me of seeing ads for the supplement you mention here. Seems I missed out on something special, may have to track down a copy.

Look forward to reading your future posts on this, especially regarding avoiding railroading.

I have but two words, and they are both participles:

I expected 30x30 ;)
The one-page format would work really well but you'd have to have other notes about each place (who runs it, price modifier for shops, etc).

I read about a book that's come out about a city in a universe that's so old time is breaking down. Every book contains some of the same characters and features but they're all remarkably different from last time. And the city is fundamentally changed because of the shifting and flowing. There are no clear boundaries. Reality holds together just enough ... today.

But I can't remember what the book was titled. I read a lot of blogs! I'll try to find it.

That little gray insert in the Lankhmar book was so nifty. One of my players once took to the "Ruins" geomorph and used the spiral staircase to create a magic item-crafting sanctum.

Geomorph malleability is definitely handy--and your idea for using it is simply splendid.