Back from the Lesser White North 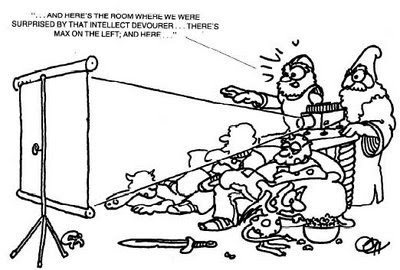 I’ve just gotten back from my sojourn into the lesser white North of upper New York State and have begun the process of getting back into the post-Christmas swing of things. I’ll be catching up on comments and such over the course of the day and getting things in order for the upcoming New Year.

My trip upstate was just what I needed to relax and not think about too much about things role-playing related. As much as I love the game, sometimes it’s nice to turn of the referee part of the brain for awhile and just enjoy time with friends and loved ones. And eat. Oh yea gods, did I eat. I’ve never spent as much time with folks who take the feasting part of the holidays as seriously as I did during these past four days. I was running the risk of having the inflatable mattress I was sleeping on fold in half like some giant blue taco shell with myself as the overstuffed meat filling in the middle.

The trip was a reminder that age is slowly settling in. Back in my punk rock days, I wouldn’t think twice about piling into a car for an eight-hour trip to see a band play in a distant city, knowing that I’d probably be spending the night on the hard floor of someone I hardly knew, using a smelly duffle bag and a spiked leather MC as bedding. More often than not, I’d wake up with stale beer and cigarette butts plastered to my face and stinky feet from wearing my boots to bed. Now, I’m relishing the fact that I get to sleep in my own bed again and the four hour drive took more out of me than I’d like to admit.

I picked up some nifty old-school swag thanks to direct presents and gift cards, so much that I hardly know what to start reading first. That’s a problem that I’d like to have more often. Despite the great classic gaming products I received, the prize for best present has to go to this: 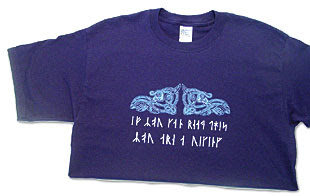 Not directly game related, but a very much appreciated gift from my brother that continues my family’s tradition of celebrating Christmas with nods to our Norwegian heritage. The shirt says: “If you can read this you are a Viking.”

I’ll see you folks on Monday with all new ruminations and musings.
Posted by Michael Curtis at 12:26 PM