Those of you who’ve been following these missives for awhile have probably deduced two of my loves when it comes to dungeon design: strange statues and weird real world events that can be mined for inspiration. Recently, I’ve discovered something that combines the two.

While Goggling my way across the Web, looking for weird statues to help feed a project I’m working on, I came across the works of the Norwegian sculptor, Gustav Vigeland. After looking at some of his works, specifically those installed at Frogner Park, I concluded that some of these piece –or at least their R’Nisian counterparts – simply must be found in the shrouded chambers of Ol’ Nameless.

As you’ll soon see, Vigeland had an interest in depicting the human form in his works. This field of artistic expertise goes hand-in-hand with my own preference of including statues that might prove to be a threat to parties of wandering adventurers as they spring to life, or otherwise suddenly begin demonstrating the ability to seriously injure or kill those who start poking at things they probably shouldn’t. 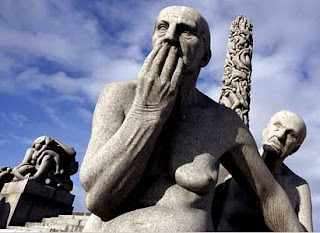 I don't like the looks of this old lady. There's something hag-like about her and her old man doesn't exactly inspire warm feelings either. 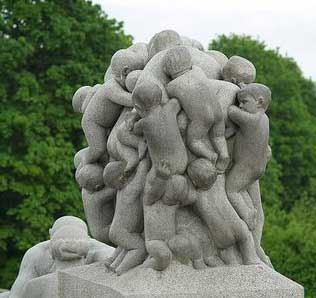 That's a ball of babies. It reminds me of a birthing group of baby snakes, coiled and intertwined. I'd hate to think what might happen if that horde of babies suddenly sprang to magical life and started heading towards the party with dead stone eyes... 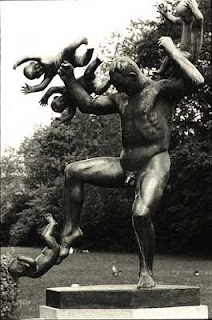 I guess I don't have to imagine it after all. An attack of babies would look something like this. 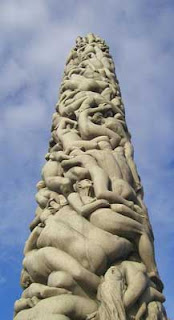 And speaking of things that I'd hate to see come to life, this is definitely one of them. I can picture this horde of adult-sized figures climbing off one another and assembling before the the party in military fashion before closing in to seal their doom.
Posted by Michael Curtis at 9:01 AM

I have been there and seen the park in winter. The cycle of life and seasons are important ideas in the work. One of the things, not in this post, that are worth seeing are the iron gates around the park. I will dig to see if I can find my slides of it. This Artists house was a boat on a hill! there is some inspiration.

That statue of the man fighting off the babies reminds me of the Internet Quiz, "How Many 5 Year Olds Can You Take on In a Fight?" I LOL'd when I saw that statue.

The pile of babies statue is kinda freaky.

This Artists house was a boat on a hill! there is some inspiration.

I'm willing to bet akvavit was somehow responsible for the boat getting up on that hill.

I'd love to see the slides if you can find them. I'd gladly share those here, as well as any other art you might have that would be pertinent to the role-playing hobby (HINT HINT).

The pile of babies statue is kinda freaky.

A pile of babies is pretty high on the freakometer. I think it's only trumped by the human worm in the movie "Freaks", when he's crawling through the mud with a knife in his mouth. He's got no arms and legs, but look out! He's got a knife...