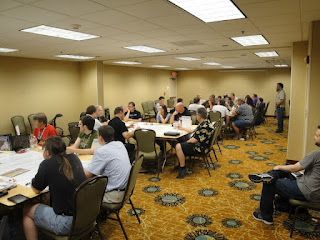 Saturday kicked down my door like a fighter with 18-double-aught STR and dragged me back into the sea of con attendees. After surviving another go-around with the hotel restaurant for breakfast (I chose to order food rather than sample from the worn-down looking buffet), it was back to the Longhorn Room for a session with a surprise twist: “Expect the Unexpected.”

I knew what the surprise was before going in, having had the beans spilled to me by Doug the night before after I mentioned that I was going to try to sneak into Frank Mentzer’s Boot Hill game. Boot Hill was one of those titles that I always wanted to try, but my FLGS never seemed to carry a copy of it back in the day. Having a chance to correct that gap in my gaming experience with Frank at the helm was a welcome one. But, alas, there was a catch. 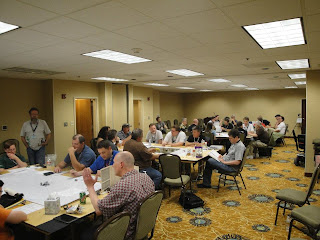 “Expect the Unexpected” was a take on the premise from the TV show “Quantum Leap.” Each participant would play at one table for a pre-determined period, then “jump” to another table, picking up a PC left behind by the group that just departed. The referees were all industry folks and the games a peculiar, but entertaining lot. Jim Ward was running Metamorphosis Alpha, Frank had Boot Hill, Jeff Dee was running Cavemaster, and Steve Winter had brushed the dust off of Star Frontiers for the session. I started in Jeff Dee’s Cavemaster game along with seven other Neolithic wayfarers. 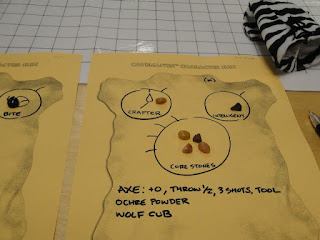 I mentioned Cavemaster earlier and how much I was impressed with it. It’s even better with a group. Jeff gave us the plot: a wandering band of cavemen and cavewomen traveling to meet up with our tribe at our traditional nomadic hunting grounds. We were out of food and hoon-gry, which is bad news if you’re a cavefolk. The party was comprised of “classes” one would expect in a Paleolithic setting (hunters, gathers, warriors, shaman, and me, the smart one), all of whom brought their own specialized talents to the game. The gatherers found enough food for us to survive one day, but it was evident we needed meat. Luckily for us, we soon found a quartet of peccaries drinking from the river and it was on! 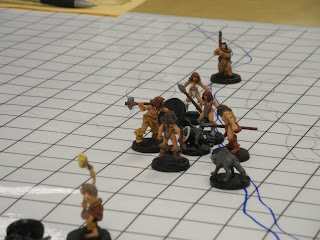 Neat mechanics aside, I had a better time trying to hunt those four pigs than I’ve had looting a dragon’s lair. The players were all getting into the caveman shtick (speaking in broken English, giving ourselves names like “Healing Milk,” “Flame Hair,” “Deer Runner,” and “Fire Maker,” and grunting and hooting whenever appropriate) and knowing that if we failed to get enough meat to feed us all for a few days it would result in a long starvation or the invention of cannibalism. The stakes felt much higher and therefore the fun was increased. When we successfully brought down three of the four wild pigs, it was if we had accomplished something important and tangible, something very much unlike killing an orc and taking his copper pieces. We’d managed to dress the pigs and start weaving baskets to carry all that glorious meat when it was time to switch tables.

We found ourselves aboard the Warden in Jim’s Metamorphosis Alpha game and he took no time in presenting us with plenty of opportunities to kill ourselves. This was the second time I’ve had a chance to play MA with Jim and I had a massive karmic debt to pay for last time. I was fully prepared to throw myself on the proverbial (or more likely in Jim’s game, not-so-proverbial) grenade to save the party. Unfortunately, due to the stipulations of “Expect the Unexpected,” Jim could only banish the clumsy, stupid, and unlucky to the cryo-tubes—a fate I somehow avoided once more without tossing my fellow PCs under the space bus. I maintained my 100% survival rate in Jim Ward’s games and now hang up my uniform and retire terrified, but undefeated. I’ll not miss the R radiation-emitting space slugs that were the doom of so many others.

Next up it was off to Boot Hill and we found ourselves in—as Frank stressed—the historical Old West. Most of us were unfamiliar with Boot Hill, so Frank had to eat up a lot of time giving us the gist of the mechanics, but we did manage to fight off some Indian raiders, equip some armored wagons, and buy some dynamite for the next party to jump to the table to have fun with. Frank later confided to me that the session we were playing was inspired by “Star Wars” and just had the obvious serial numbers filed off. In retrospect, it’s obvious, but also genius.

One last leap before our return to the world of Cavemaster landed us in the bowels of an alien city—Star Frontiers time! Fending off robots and Sathar, we worked our way through the crystalline underbelly of the metropolis in search of missing scouts and really managed to screw ourselves up when we drove into a claymore mine and blew up. But, as was quickly pointed out, that wasn’t going to be our problem anymore in about ten minutes. My apologies to the group that came back and found their PCs all banged up.

Star Frontiers was one of those games that I enjoyed in theory when I was younger. The “Knight Hawks” expansion was one of my favorites, but the alien races and default setting never did anything for me. Having experienced it again and become re-acquainted with its simple d% resolution system and skills, I’m tempted to hack it together with Traveller and a slew of other sci-fi influences and give my own spin to it. File that under the “someday campaign” list we referees keep. 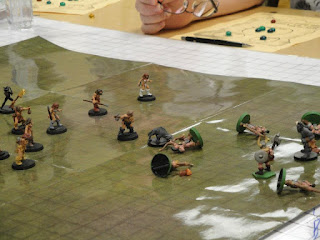 At long last, we cavemen returned to our homeland to discover ourselves in the middle of a pitched battle with cannibal, armor-wearing Neanderthals (we missed the pterodactyl fight). Ultimately, we defeated that enemy and rescued our fellow tribes-people from becoming supper, and even managed to begin retro-engineering the concept of armor to make ourselves invincible in the Neolithic world.  “Expect the Unexpected” was a very, very fun stretch of hours and I hope the experiment is repeated at future cons.

Next Up: The Not-Be, the Toads, and Farewell
Posted by Michael Curtis at 4:04 PM

I was with you in that group, Michael (I was the guy with the connection to the mammoth spirit). That entire round-robin game was probably the highlight of the entire con for me. You, by the way, played up the intelligent caveman with aplomb. Cavemaster really turned out to be quite an enjoyable game, and I've already used the mechanics in my own D&D game on Thursday nights. It was such a simple but elegant system. Anyway, nice to hear about your experiences at the convention.

It was great playing with you J. Michael! A pleasure spanning space and time and hooting like a madman.