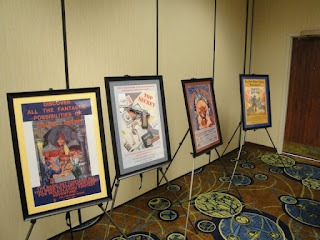 Friday morning saw me up early, rising before most of my fellow gamers emerged from their bedrolls, and the restaurant was just beginning to serve breakfast. But first: a quest! Needing various sundries, I decided to venture out to the gas station across the highway from the hotel. This stretch of thoroughfare was under severe construction, littered with traffic cones, mesh netting, concrete barriers, and thick, sticky mud. Traffic was a snarl even at the early hour and the whole unsightly mess became known as “The Highway Jim Ward Designed” for its sheer lethality. Dodging traffic and acquiring a thick coating of Texas mud to my sandals (they’re still caked in the stuff two weeks later), I managed to make it to the service station and back with all my hit points and limbs intact.

After breakfast, I milled around with the early risers for awhile, thinking I had time to kill. My first DCC session was supposedly scheduled to begin at 10 AM and the website and gaming grid supported that belief. Unfortunately, the convention program had it listed as starting at 8 AM, so I headed down to make the correction on the table sign in case anyone showed up early. Imagine my surprise when I found the entire table filled with players patiently waiting for me. OK, game on!

The scenario was “Emirikol Must Die!,” a stripped-down version of “Emirikol Was Framed!” I rigged up just for Texas. I discarded a lot of the backstory and set-up to get things rolling quickly, but soon learned I should have stripped it down more. As it was, I had to throw out the entire middle section of the adventure to get to the part where the PCs get a shot at the Chaotic One. They did triumph over Emirikol, thanks largely to the intervention of the elf’s patron, The Three Fates, who, thanks to a really great spellcheck, made them nigh-invulnerable for several rounds and gave them a +5 to most of their actions. Similar wise use of magic allowed the PCs to avoid a few of the deadlier traps, but I did almost manage to kill one character with a magical blueprint of death (buy the module when it comes out and see what I’m talking about).

A note about my referee style: I’m not usually a squat-behind-the-screen-and-roll kind of guy. I like standing and moving around when I run a game. This session had me going all out, however. I used the entire room to my benefit, peering over a divider to demonstrate a PC clinging to a balcony, skulking along a wall to show a thief’s move quietly attempt, squatting on a chair to emulate a pair of sleeping pterodactyls, and, in one moment of showmanship, throwing myself onto the floor to recreate a disastrous failed spellcheck roll. Something about this game had me on my best (or worst) hamming it up behavior.

I did forget to get everyone’s names who participated in “Emirikol Must Die!” A few are obvious (Erol Otus sat at my left hand during the game and took up the challenge of a DCC RPG Wizard) and fellow blogger Robert Fisher and his son were there as well. However, we had a few no-shows who were replaced by walk-ins and I didn’t grab everyone’s real names during the game. Goodman Games wants to credit you all as playtesters, so if you’re interested and are reading this or your know someone who played in that game, please contact me with your name either in the comments section or at the email addy over on the right. 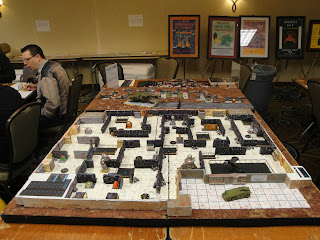 After Emirikol died, I headed back to ballroom and chatted with fellow con attendees. I think I dropped some more cash at the con store at that time, picking up a secondhand copy of both Quag Keep and C.L. Moore’s “Northwest Smith.” Allan Grohe and I talked preservation of materials with intrinsic historic value (Black Blade has something very nifty in its possession and is just waiting on contracts to announce it and release it into the wild. Thanks for the early look, Allan). I’d see Allan a little later in Castle Greyhawk, but I yet again managed to miss a single one of his Aliens games. Gary Con V for sure, I promise!

Finished hobnobbing, it was time for me to wander back to the Longhorn Room for the impromptu “Gonzo Gaming” panel that was scheduled for Tim Kask and I. The link to the video of that is here. It was very nice to see some familiar faces in the crowd and I hope that Tim and I managed to sum up what “gonzo gaming” means to us and not bore you too much with war stories and off-beat ideas. Doing the panel with Tim was a lot of fun and we’re already thinking of what the “Tim & Mike Show” might do for Gary Con V. 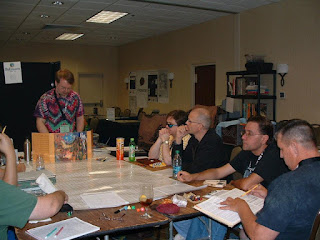 The panel ended, allowing me an hour to grab dinner at the hotel bar before heading off to explore Castle Greyhawk. Allan Grohe does a great take on it, but I’ve learned that I really have problems facing 1E in an evening session at a con. I ran into the same situation at Gary Con IV. Basic D&D has become my game of choice and facing that wall of 1E modifiers and classes is just too much for my frazzled mind to handle in the evening hours. Notice my glazed look in the picture to the right. I’ve made a mental note of this and the next time I tackle 1E it will be the first session of the day. Despite my difficulties, my bard survived (barely), but those of us at the table agreed to never speak of the rust monster battle again. 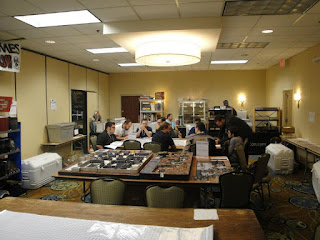 After Castle Greyhawk wound down, I hung around for a little while longer, talking with Dough Rhea and Mike Badolato and other people wandering around. I saw Matt Finch and wished his good luck on the morrow’s Three Castle Award and finally got a chance to say hello to Tavis Allison. We kept seeing each other around the con, but never had the opportunity to shake hands and catch up. Tim Kask and I eventually wandered off to talk more about Eldritch Enterprises and other non-gaming related stuff, but soon it was way past the Witching Hour and I had to make my farewells for the evening before climbing into bed and falling instantly asleep.

Next up: Travelling through time and space, the Not-Be, and a whole lotta toads.
Posted by Michael Curtis at 11:44 AM

You were definitely firing on all cylinders that game. All the DMs at the con are great, but I think yours was my favorite session this year. And I really appreciated the way you encouraged my son.

Interestingly, I think we had three father-son combination at that table.

And I can ID one more person from that game: Ben Burns.

Thanks, Robert. I know you're right about another father-son team and I think I have their names from the registration info I was able to get my hands on. I know we had nine players in total at the table. Who did Ben Burns play?

Ben was the cleric sitting next to me. The one who kept losing his god’s favor. And I think the player of the elf with the powerful patron might have been Ben’s son.

I believe Robert is correct about the player of the elf being Ben's son.

My son and I were indeed players as well (James and Drew Santagate). We sat at the far end of the table, and Drew played a Thief while I played a Dwarf. I think we ran into each other several times during the weekend too, Michael, and I remember talking to you for five or ten minutes on Sunday morning about an hour before you were scheduled to leave for the airport. You were a pleasure to talk to and the most entertaining DM of the weekend. We enjoyed your game immensely! Thanks for signing a few books for me too!

Thanks for the confirmation, Toric! I figured from the registration info that I was able to access that you and your son were the Santagates, but now I have confirmation and you'll both be credited. If anyone has contact info for Ben, please pass it on to me or get in touch with him and confirm his son's identity and let me know. I think that will ID everyone except for the couple that joined us as walk-ins. Although all nine names would have been nice, I can live with seven.