The end of the year saw me engaged in a little miniatures inventory, refurbishing, and preparations for painting in 2012. As part of this process, I came across the box that once contained my only membership in Grenadier's Dragon Lords Giants Club: The Chaos Giant. Although the giant himself is long gone, I still own the obelisk and the guy about to be smooshed under the Chaos titan's foot.

I almost threw the box away as it's in pretty poor condition, but decided to retain it for nostalgia's sake. On a whim, I pulled up the foam padding at the box's bottom and was astonished to find that the insert that came packaged with the box was under there. Since that's the kind of thing well old schoolers apparently jones for, I've scanned it and posted the images below. Click to embiggen. I think it's pretty safe to assume that there's now going to be a Helwaste somewhere in my campaign world. 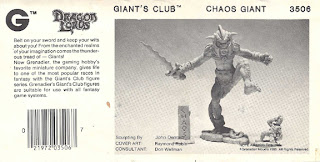 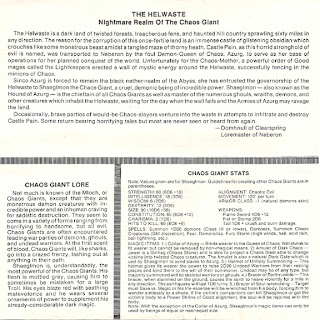 (Yes. I know it doesn't mean where. sheesh. get off my back.)

Very Cool. That last picture though about the entire series is very intriguing. Any chance you know where to find the other nine giants and the additional maps which lead the way to Castle Pain? I'd be interested in seeing at least the box covers of the giants (if not the miniatures themselves) too. And, of course, the goal of the quest - the Giant King's Throne.

Ok, answered part of my own question. Here is the link that did it:


It shows box covers for all of them and and pictures of most of them - Frost giant mini picture is missing. Also MIA is a picture of the mail order Giant King's Throne.

Still wondering about the illusive map and Giant King's Throne though.

Wow - that is a great past blast!

I had that figure checked off on my Grenadier wishlist, but alas never picked it up.

Two things: (1) Interesting that Grenadier was able to include AD&D stats - I didn't know they had license from TSR to do so. (2) I love how Grenadier included "tableau" figures whose only purpose was to make another figure look good/fearsome/awesome - Smushy is a great example.