The Final Level of Stonehell Dungeon

I was going to post an incredibly useful PDF about horses, horse trading, and other equine pursuits today, but MediaFire has made “improvements” and I can no longer upload files to share with you fine folks. So, until they give me a workaround, here’s a sneak peak at the final level of Stonehell Dungeon. Get your vorpal swords ready! 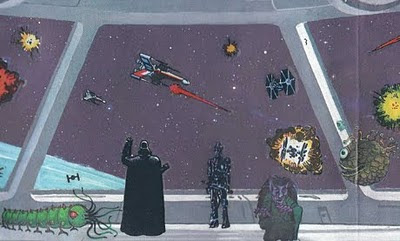 Readers may recall that I was lamenting my lack of certain toys from my youth last year during the holidays. Amongst those I was missing were Presto Magix rub-on transfers. Christmas came and, lo and behold, I got a present from my brother in the guise of my two-year old nephew. He had forgotten about Presto Magix until my blog post reminded him of our misspent youth doing these things in front of our titanic wooden television set. He managed to not only track down a Star Wars set but several AD&D sets as well and presented them to me gleefully at Christmas.

Last night, we had snow yet again here in New York and I decided to while away the hours by making a mash-up of both types of Presto-Magix sets. You can see the final result by clicking the image below. The entire time I was creating this masterpiece, the only thing I could think of was that this looks like either the ultimate battle in Stonehell Dungeon or just another day in the world of Encounter Critical. Incidentally, I’m also pretty certain that this is what’s going on inside of Jeff Rients’ head at any given moment…

Oh, man, I remember these!

The Qullan graces the inside cover of my beat-to-hell copy of Saga of Old City.

Awesome, I don't think I've ever seen those D&D rub-ons.

I had the Star Trek variety. Very nice find.

Yep, that's True Scientific Realism if I ever saw it.

I had so many of these things as a kid. They were always cheap to pick up, so many different sets found their way home with me-Star Wars, D&D, Spider-Man, GI Joe...

Awesome, although I felt great anxiety when I realized there was no preview of Stonehell 2. :(

I almost forgot about those things :)
Thanks for sparking that memory!