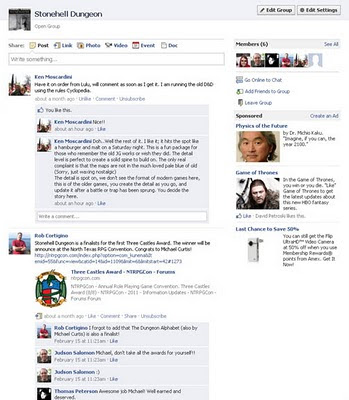 For reasons many people would undoubtedly consider “quaint,” I do not have a Facebook account. It has recently been brought to my attention, however, that my dungeon does. Organized, or perhaps orchestrated, by one of my regular players, the Stonehell Facebook Fan Page exists and can be found here (I hope that link works since, not having a Facebook account, I can’t make certain). If enough people join, maybe, just maybe, I’ll have to bite the bullet and surrender my last vestiges of a simpler time by joining the unwashed digital masses in their Mafia Wars nonsense. Until then, you can all talk about me behind my back with my regular players.

EDIT: I've been informed that the Stonehell Fan Group has flourished from a mere six people to thirty-six. Thanks to everyone who has taken the time to sign up and express their interest in and enjoyment of Stonehell Dungeon. I'll see if I can make something special happen for you fine folks...
Posted by Michael Curtis at 9:01 AM

That was the best tribute I have seen to Mr. Roslof. Thank you for sharing that, Michael.

Stay away Mike. There are no really good reasons to give Facebook a personality profile on you. Your dungeon can probably manage without Daddy.