Bang A Gong, Get It On

I was standing in line at the local bookstore a few days ago, patiently waiting for the one guy behind the counter to work his way through the long queue that had formed. I happened to be standing by the rotating display of shoddy impulse items and my eyes fell upon The Executive Desk Gong. Hmm, I thought to myself, there’s something that has a few gaming possibilities. When I reached the cashier, the desk gong had joined my collection of purchases.

Once at home, I opened my new gong and grabbed a few miniatures for a size comparison. Not quite to scale but very close. The gong itself looks like it’s about 10’ to 12’ in diameter and stands 15' to 20' high with its frame when compared to the D&D Miniatures. Here’s how it looks: 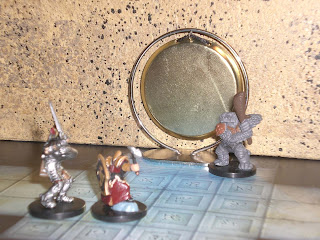 All I needed was a few gong-related ideas to go along with my new acquisition. A brief brainstorming session came up with the following:

1 – Gong of the Dead: Striking this gong causes 2d6 undead to arise from their places of interment. Coffin lids creak open, sarcophagi lids crash to the floor, and masonry crumbles from the walls to expose the niches which housed the undead. They advance upon the party menacingly, under the control of the creature who struck the gong.

2 – Gong of the Planes: When the gong is struck, the surface of the instrument begins to whirl and crackle with eldritch energies. All within 30’ except the wielder of the mallet must save vs. spells or be sucked into the gong’s vortex. Those who fail are cast into another plane of existence, one either chosen by the referee or determined at random.

3 – Gong of Inert Magic: Ringing this gong causes all magical items in a 30’ radius to be temporarily nullified of their power. This effect last for 1d10 rounds. Additionally, only spells that affect the caster may be invoked, as if the area was under the effects of an anti-magic shell.

4 – Gong of Summoning: If this gong is struck, an extraplanar creature is summoned to the gong’s location and serves whoever rung the gong for 1d6+4 rounds. The creature summoned is determined by the referee and may include elementals, demons, devils, devas, djinni, efreeti, etc. If the mallet is wrested from the controller’s hands, command of the summoned creature transfers to the new wielder.

5 – Gong of Deafening: Ringing this gong causes all within 30’ (except the gong’s striker) to save vs. spells or become permanently deaf. A heal spell will cure this disability.

6 – Gong of Confusion: If the gong is struck, all within 40’ (including the creature that rang the gong) must save vs. spells or be confused as the 4th level magic-user spell.

7 – Gong of Defense: This gong attracts all missile attacks targeted at anyone standing in front of it. Such attacks miss their intended target completely, striking the gong’s surface with no effect (diabolical referees might rule that attacks that strike the gong produce another effect from this list). For the purpose of the gong’s defensive properties, missile attacks include arrows, bolts, throw weapons, magic missiles, Melf’s acid arrow, Melf’s minute meteors, and any other magical spell that targets a single individual. Area of effect spells such as fireball, lightning bolt, ice storm, etc. are not affected by the gong’s power.

8 – Gong of Self-Destruct: A last ditch defense against intruders, this gong, when struck, causes the location in which it is housed to begin to collapse. Ceilings start to cave in, walls crumble, pyramids sink into the sands, floating castle plummet the ground etc. Once struck, all within the complex have 1d3 turns to reach minimum safe distance. The referee may call for saving throws and/or ability checks to avoid taking damage from falling debris, exploding machinery, and other harmful side effects of the location’s self-destruct sequence. Such gongs usually require a special mallet or striker to invoke the instrument’s power and these items are very well protected to prevent inadvertent destruction.

9 – Gong of Exploding: This magical trap explodes as a 10 die fireball if it is rung. This effect generally destroys the gong and anyone nearby. As above, this power usually (but not always) requires a special mallet which is often found close by to encourage foolish adventurers to hit it.

Finally, I couldn’t let a post on gongs end without slipping in a Gong Show gag:

10 – Gong of the Barris: Striking this gong with the accompanying padded mallet causes one of three effects to occur, which may be determined by random or chosen by the referee.

1-2: A enigmatic figure dressed in outlandish clothing and wearing a paper hood appears. This individual begins telling abominably bad jests and all within ear shot must save vs. spells each round this unknown comic remains in the area or suffer the effects of Tasha’s uncontrollable hideous laughter. This mysterious jester remains for 1d8 rounds before vanishing.

3-4: A dark-skinned, mustachioed man dressed in a green windbreaker jacket, bell-bottomed jeans, sneakers, a yellow polo shirt, and a black painter’s hat suddenly appears accompanied by unseen musicians. This oddly-clad figure begins to dance and all who witness his unique gyrations are affected as if by an Otto’s irresistible dance spell. The music ceases and he vanishes after 2-5 rounds.

5-6: Striking the gong summons The Barris, a 12th level assassin who works for a occult cabal known as the Sea Eye Eight. Unpredictable and deadly, The Barris’ intentions are inscrutable and left up to the referee to decide what plans he might have in regards to those who have summoned him from his home plane.

Posted by Michael Curtis at 9:28 PM

Beautiful!
Sea Eye Eight is brilliant and much appreciated, you dangerous mind, you.

*gggrroooooaaannnnn* at that last section. :P

Quite aside from the horrors of 70's TV, those magical gongs are excellent. Thematic, favourful, gold.

Actually, it's odd how there aren't really any magical gongs in D&D.

Those are absolute gold. Yes, even the last one ;3 I love it!

The appearance of "Gene Gene the Dancing Machine" makes this the greatest thing on the internet ever.

The appearance of "Gene Gene the Dancing Machine" makes this the greatest thing on the internet ever.

As the video attests, the man did indeed possess the mystic ability to make anybody dance by his mere appearence.

This is so going into my megadungeon! I wish I got these ideas on my own. :)

That gong looks GREAT next to the minis!