The Last, Long Mile of the Stonehell 2 Journey

I've been keeping the masses informed about the progress of the Stonehell Dungeon sequel over on the books' Facebook and Google+ pages, but new milestones have been reached. I thought I'd share that report here, along with a preview of the cover art and links to other associated projects.

I’m extremely pleased to break the month-long silence with news that all the last elements of the book are coming together. As predicted, I didn’t have much to report as the book’s progress relied on other people’s contributions and wasn’t directly in my hands. It amazing how things move forward when I’m not the one responsible for pushing the project along. This report brings us two big pieces of news: the finalization of the sequel’s cover art and the edited manuscript back in hand.

J.A. D’Andrea, who did the cover of the first Stonehell book, is providing the cover art for the sequel. I’m always greatly impressed by J.A.’s work, but his piece for the sequel really struck a chord. He did a magnificent job of expressing the depths of Stonehell Dungeon and the strange mentality that accompanies those who tread its halls. I’m proud to feature this one on the cover, not only because it’s good, but because having J.A.’s work reappear makes a nice book-end for the Stonehell series. Other pieces of art are also trickling in, meaning that I’ll soon have all the components needed to push on to final layout. 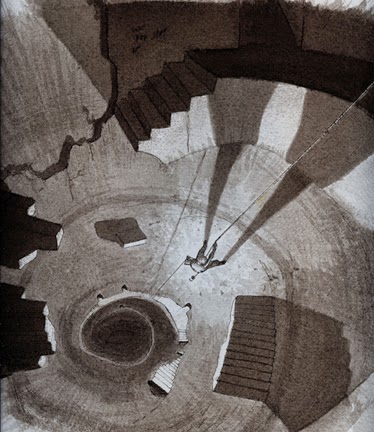 I have also received the edited manuscript back from the outside editor. I’m happy to report that my own three passes over the draft were not in vain and that the editor found only minor corrections that need to be implemented. This was a great relief, as my mind always suspects the worse when I send things off for others to review. However, in this case at least, the worry was unfounded.

Here’s what remains to be done on the punch list:

1) Implement the minor changes required by the manuscript.
2) Collect the last stray pieces of art.
3) Finalize the layout by adding the art, tweaking the format, and including the various legalese, index, credits, and “special thanks to” sections.
4) Compose the cover.
5) Get a printer’s proof made and review it.
6) Make any final changes required by the proof.
7) Publication.

As you can see, there’s still a little work to be done, but we’re heading into the last mile of the journey. Unfortunately, and you knew there had to be an “unfortunately” if you’ve been following this project, I’m running into a time crunch. The success of the Metamorphosis Alpha Kickstarter left me with a few pressing projects that need completion ASAP. I need to get these off my plate before I can attend to the sequel. I also have North Texas RPG Con in a month and must complete the last adventure that needs writing before I get on the plane for Dallas (space remains in at least two of my games if you’re interested). I’d hoped to be able to debut Stonehell 2 at North Texas, but, barring a miracle of time and effort, I doubt this will occur. Rest assured, I’m eager to complete Stonehell 2 and bid a fond farewell to the project. I’ll continue to push ahead when I can and I’ll keep you informed of my progress.

Once again, I thank you for your patience, but know that we’re almost there. In the meantime, I ask anyone who enjoys my work to check out the latest Goodman Games’ Kickstarter for The Chained Coffin, a new adventure penned by me that centers on a hexcrawl through a “fantasy Appalachia” as inspired by the work of Manly Wade Wellman. The Chained Coffin is one of my favorite works to date and I think it demonstrates admirably the goal of DCC RPG going back to the source material of the hobby and doing new and interesting things with the Appendix N material.
Posted by Michael Curtis at 10:02 AM

It was a while ago since I took down that first volume, but now you have made me think about it again...

Thanks for the update!

Dying to know when/if the 2nd Stonehell will make an appearance . . .

Any news about when Stonehell two will be ready to for victims..eh... adventurers?