There is a Kickstarter currently underway for my forthcoming DCC RPG adventure DCC #83 The Chained Coffin. Why is Goodman Games conducting a Kickstarter rather than simply publishing the adventure as they’ve done eighty-two times before? Good question.

It began with a little puzzle lock idea I included in the original manuscript. An ancient and long-sealed door bears a combination lock puzzle that needs bypassing in order to get through the mighty valve. My initial plan was to have the puzzle illustrated in three pictures that could be printed out or photocopied, and then the judge would assemble the wheel by hand to give to the players to monkey with. Joseph Goodman thought we could go one better and inquired with the printers whether it was possible to create such an item and have it included with the adventure. It was, but it would take a little doing, and thus the Chained Coffin Kickstarter campaign was launched. 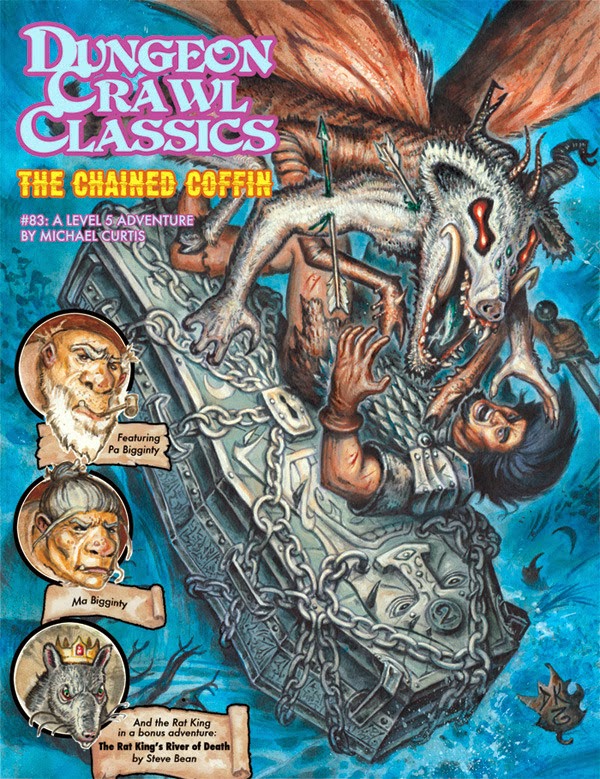 That was the humble beginning of a project that is now dreaming big dreams and asking the DCC fans for help achieving that objective. Joseph and I discussed various stretch goals to help drive the Kickstarter, and I admitted that I had a lot of stories waiting to be told in the Shudder Mountains, that fantasy Appalachia analog inspired by the works of Appendix N author, Manly Wade Wellman. I originally told Joseph that if the adventure proved popular, I’d like to revisit the setting again in a sequel. If all goes well, I might not have to wait that long.

It has come to pass that The Chained Coffin may be destined for greater things that a simple 32 pp. adventure. If the fans desire it, The Chained Coffin could become a mini-campaign boxed set, one that includes a large 11”x17” regional map, a gazetteer describing the Shudder Mountains, and, in addition to The Chained Coffin adventure, a pair of secondary adventures designed to begin play in the region as zero-level PCs and to encounter later in their adventuring careers.

Needless to say, if this “campaign in a box” idea becomes a reality and is well-received by the fans, it may begin a new trend with DCC RPG. People have been clamoring for an official DCC RPG campaign world (whether a new one or a revised version of Aereth, Goodman’s original campaign world for the 3E DCC adventures) and this could be the first of several steps to make that happen.

DCC RPG encourages judges to abandon the notion that the campaign world needs to be a vast, sprawling expanse filled with countless cities and diverse ecospheres. Instead, DCC RPG suggests taking a smaller approach and limiting the campaign to a compact region, like a duchy, a minor stretch of wilderness, or even a single valley. The Shudder Mountains are precisely this style of world design: a finite area filled with enough adventuring ideas, unusual locals, and unique critters to meet the needs of long-term play.

A series of “campaign boxes” would allow judges to pick and choose what they want to include in their campaign worlds, rather than be given the full world treatment common to most pre-packaged fantasy campaigns. To continue with an Appalachian-themed metaphor, you’d get the patches to make the quilt rather than the whole blanket, and could assemble them using only the squares of color that catch your interest. Not into Egyptian-themed adventuring regions? Then there’s no need to spend the buy that campaign module (although if I wrote that one, I hope you would anyway). Love the idea of sword-and-planet type adventures? Pick up the hypothetical “Perils of the Purple Planet” themed set. And so on down the line.

This way, the folks who want a sense of a shared campaign world could have one—if they so desired—while the maniacal homebrewed campaign designer could pick and choose, utilizing material from the sets that captured their interest whole cloth or just the portions they liked. It’s an interesting concept and I believe it would be useful to game masters of not just DCC RPG, but other fantasy games as well.

As it stands now, The Chained Coffin Kickstarter needs to meet a goal of $36,000 dollars to make the boxed set a reality. But even if it fails to hit that mark in the two-weeks-and-change remaining, there’s still a plethora of goodies already funded. As of this morning, a $30 pledge entitles you to:

2) A stand-alone spinning wheel puzzle dial along with five other ways to utilize the device in your campaign beyond the original door lock.

3) Additional source material including a patron write-up for “Ol’ Blackcloak,” a powerful entity encountered in the adventure.

4) A mini-gazetteer of the Shudder Mountains region.

5) Several pages of added random encounters in the Shudder Mountains.

7) Seven alternate versions of the Bad Lick Beast, another challenging denizen of the Shudder Mountains.

10) The Almanac of the Shudder Mountains (working title) that compiles the additional background material into a single, digest-sized supplement for ease of reference during play. The Almanac includes several new monsters waiting to meet the players.

11) $18,000: The Almanac will be expanded to include Magic of the Shudder Mountains.
12) $20,000: The Almanac will be upgraded to 24 pages of normal letter-sized pages, and will be expanded to include even more gazetteer material.
13) $25,000: We'll add in another mini-adventure in the Shudder Mountains that fills the gap between your level 0 characters and the level 5 Chained Coffin module.
14) $30,000: The Almanac will be expanded with another 8 pages of gazetteer material further expanding the Shudder Mountain region.
15) $35,000: We'll print an 11"x17" poster map of the Shudder Mountains region.
16) $36,000: We'll print a full-color box to hold it all! The Shudder Mountains gazetteer and adventure path will be complete. This two-part box (i.e., complete with "box and lid," both in color) will hold your copy of the module, the Almanac, the poster map, and the bonus mini-adventure. With some room to spare!
I’m immensely proud of the work I’ve done with the Shudder Mountains. You can hear me gush about the project a bit on the latest Spellburn podcast (note that the stretch goal tiers have been reduced in cost since that episode was recorded—you get an even better deal for your money!). It’s not every day one gets the play in a world inspired by the evocative works of Manly Wade Wellman and transform 1950s Appalachia into a fantasy setting. I summed up the experience and The Chained Coffin itself in a piece I penned for last year’s Goodman Games Gen Con program:
One of the great joys of writing DCC RPG adventures comes from the game’s commitment to remaining true to the classic pulp-era fantasy and science-fiction stories that inspired fantasy roleplaying, the so-called “Appendix N” tales. And while “sword & sorcery” yarns comprise the lion’s share of Appendix N, they are not the only types of stories found within it. The Chained Coffin derives its inspiration from American folklore, as perceived through the atmospheric works of Manly Wade Wellman. You’ll find no kobolds and orcs in The Chained Coffin, but plenty of restless ghosts, shunned witches and conjure-men, and devils willing to make a deal at midnight, all set against a backdrop of superstition-filled mountains and secluded hollows where the still air smells of pine trees. Heady stuff, indeed, and a far cry from your traditional fantasy RPG fare.
The Chained Coffin stands as my favorite DCC RPG adventure to date. The opportunity to create and then dwell for a time within a region more at home in the eons-old Appalachian Mountains than the fantastical landscapes of Tolkien, Howard, Moorcock, and Leiber was a designer’s dream. Hopefully, my personal enjoyment will be shared by you, the judge and player. So gather ‘round the fire, friends, pass the jug this way, and bend an ear to the music of the mountains. There are both horrors and wonders waiting in the Deep Hollows and, if you listen close at midnight, you might just hear a tune or two played on a lonesome fiddle strung with silver strings…
I’m looking forward to the opportunity to expand on the material I’ve already conjured up. Hopefully, if share an interest and want to be part of it, we’ll make the boxed set a reality. Please share this post or the Kickstarter page with similar like-minded folk if you would. I’d be most appreciative if you help me turn the Shudder Mountains into a place that spawns a hundred new DCC RPG campaigns. I’ll sign off now and let you go take a gander at the Kickstarter and weigh your decision. But before you depart, allow Leadbelly to put you in the appropriate state of mind:

Thanks, friends. See you in the Shudders.
Posted by Michael Curtis at 11:04 AM

Great post. Maybe I'm missing it, but I don't see anything on the KS that breaks out which pledge levels are eligible for these extras?

Ah - found it. $30 is the sweet spot for this. While it's definitely spelled out in the text, maybe consider adding it to the pledge level window on the right.

Alas, it's my understanding that the pledge level windows can't be modified once the Kickstarter goes live. It's a security feature to prevent fraudulent creators from changing what they promise each tier will give you half-way through the campaign. Otherwise, I'm sure Joseph would have done so.

Glad you found the info anyway!

Absolutely awesome stuff sir. I'm so glad that this is getting all the support it has. Treading on a different path! I took my campaign world and players in this direction about 5 yes ago and we haven't looked back. It's great to finally see others (especially a game company) explore the untouched riches of Appendix N's 'other' material. John the Ballader stories evoke such a rich & rustic fantasy feelings I hope that you further expand on this even after the Kickstarter is over.

The more I hear you talk about the concept of microcosms the more it sinks in. At first I didn't catch on, but then as I was watching Vampire Diaries (don't judge— it's my daughters' favorite show and as a film editor it is quite educational), I did what I usually do--pick it apart. Why would a family of immortal vampires set up shop in some virginia backwater and never move out? Why would the town's law keepers not call in Federal reinforcements? The list goes on like that. As it turns out, characters don't just survive in captivity; they thrive in captivity. The gaming community has been borrowing concepts from serial television and comic books for years, so why not keep your borders small? I think this is a brat idea that has been around since the early days, but you have been able to define it. As a backer and fan, I hope we get to the final bonus levels. Thank you and keep up the good work!

I've been considering trying to do this sort of "theme" but mixing those Wellman stories with the canal era or the late 18th century era when the Ohio country was first opened up. Sort of setting Boot hill, but in an earlier frontier period.

I also think your idea is a natural for someone running a Cthulu or Justice Inc campaign.

Woohoo! Smashed that last stretch goal! Congrats! Can't wait for my copy of everything!