I've been out of action for most of the weekend but I'd be remiss if I didn't draw your attention to the following three items: 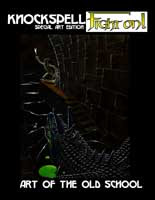 The Art of the Old School Renaissance!

Produced by Matt Finch and chock-full of the cool art you crave, evoking a time before fantasy heroes had piercings and lattes of cure moderate wounds, we are producing this book jointly in an effort to win the lulu Author Sales Contest. Currently Fight On! is in third place and Knockspell is in seventh place, and we want to get both publishers in the top three to send a statement to the world that classic fantasy roleplaying is back with a vengeance!

Costing $9 and available for purchase from either of our webstores,

buying this will help put one or both of us over the top in the final contest standings! Heck, buy one from each store and give the extra to a friend – you can combine shipping on lulu even when your products come from different sources. And while you’re at the stores, don’t forget to check out Fight On!, Knockspell, Swords & Wizardry, and all the other great products that we have for sale. All products must be purchased by the end of March to count for the contest, and as of April 1 both these special editions will be gone forever, so don't delay. Thanks for your time and interest!

Fight On! Limited Edition Compendium
To try to boost sales for the contest we are offering a unique product.

This is all four issues of FO bound together in a hardback in exactly the order and format they were originally published in. All covers except the front cover of 1 and the back cover of 4 have been made B&W and put on the interior.

We have deliberately made the price higher than the price of ordering the four issues separately, so people who already bought them seperately don't feel robbed. In fact, it's a better deal to buy all four paperback issues separately, and if you're new to the magazine we'd prefer you'd do that since it gets us four sales for the contest instead of one, but some people will want this volume in addition to their regular issues or prefer the hardbound format for some reason.

We are pulling out all stops to try to win this contest!

This and all other special edition products will be pulled from the FO! page on April 1, and then this temporary delay from publishing issue 5 will be over. 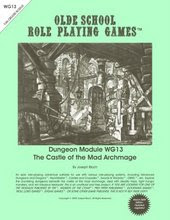 "This level was challenging in a variety of ways. It's very different in nature than the first two, in that it is a "live" level, with the vast majority actively controlled by various factions with the exception of a couple areas in the periphery. Explorers are very likely to get swept up by one of the four factions and pressed into service in the Arena; I hope that nature of the level came through in the text. I was also struck by a horrendous case of writer's block; it wasn't until I came on the idea of having the Arena still in use that it all snapped together. Once I had that epiphany, it all pretty much wrote itself. I'm particularly fond of the new monster-- the earwig-- although it doesn't exactly have a prominent role in the level."

Drop by Greyhawk Grognard and pick up the collected series as a free .pdf.
Posted by Michael Curtis at 3:13 PM