Impressions of Playing at the World

Allow me to preface this post by stating that I’m neither a professional reviewer nor an obsessive scholar into the history of our favorite pastime and, as such, this review of Jon Peterson’s Playing at the World might contain errors easily avoided by those who are. Nevertheless, Peterson was kind enough to provide me with a review copy of his enormous text and I’m extremely thankful to have been given the opportunity to read the book and post my impressions of it here. 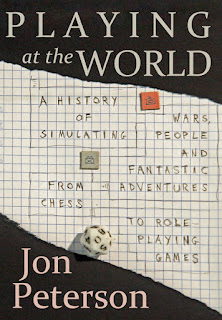 For those readers who haven’t heard of the book via other venues, allow me to introduce the book to you. Playing at the World is a scholarly text that traces the origins of role-playing, specifically that of Dungeon & Dragons. In varying detail, everything from the games of chance of antiquity up to early computer role-playing games is given consideration, but the primary emphasis of the book is the history of wargaming in its many forms, culminating in the development, release, and response to Dungeons & Dragons. Playing at the World runs nearly 700 pages in length, including an extensive bibliography and index, bears copious footnotes, and features many photographs and illustrations, some of which have never before been seen by the general gaming public. It is available through Amazon for $34.95 for the printed version and at $17.99 in the Kindle format.

While attempts have been made to chronicle the history of role-playing in the past with various degrees of success, Playing at the World stands out amongst earlier efforts in its dedicated research of the written historical record. Peterson states quite boldly in the Introduction that he concentrated his research on contemporary written sources produced during the time periods covered by the book rather than later interviews with the principles from those periods. For myself, this is the book’s strength. As an archivist, I know all too well the perils of relying on recollections of witnesses long after events have occurred. Human memory becomes untrustworthy with time and is susceptible to outside influences that can distort the remembrance of events as they actually occurred.

I consider this decision to be the correct one when penning a book like Playing at the World, but I know others will be less satisfied with Peterson’s choice. Readers looking for juicy gossips and tales told out of school by the principles (and about other principles) of the game’s development will be disappointed. Many of the so-called great mysteries regarding the early days of the game’s development remain unsolved simply because nobody commented on them in a public forum during that time, leaving no written references to draw from (which is also why they remain the great mysteries of old).

So if not a tell-all book, what is Playing at the World? Essentially, Peterson proposes a very persuasive argument that Dungeons & Dragons is not the product of a few isolated developments in America’s Mid-West during the 1960s & ‘70s, but rather a culmination of a multitude of influences extending back to at least the 18th century. These influence happened to come together in a perfect storm roughly forty years ago, but the creation of the game and role-playing as a whole does not rest solely in the hands of Gygax and Arneson. Peterson also does an exception job of arguing that, despite the prior existence of many of the elements that helped birth D&D, the game could not have come into being at an earlier time than it did. For myself, it’s this second argument that raises the book above other attempts to document the game’s history.

Playing at the World begins with a rather forthright examination of the history of role-playing in contemporary times, beginning with the development of Avalon Hill’s Tactics game in 1954 and ending with the release of D&D in 1974. Peterson covers the wargaming culture that existed in America during this period, drawing on the many fanzines and professional publications produced then to document the attitudes, feuds, games, and play styles of the period, as well as the prominent wargame groups and societies that helped influence and fuel the development of D&D.

Once 1974 arrives, however, Peterson pauses this contemporary examination and takes the reader on a backwards jaunt through time. While this jump is bound to frustrate the casual gamer looking to read about the history of D&D, and by extension TSR Hobbies, it’s an important one for more serious scholars—both those reading the book now and for future researchers examining the history of the hobby.

Over the next three chapters, Playing at the World reviews the history of fantasy literature and the role it plays in the default setting of D&D, the lineage of wargames in history and how their systems for the recreation and resolution of real events were considered, discarded, or adopted into the mechanics of the game, and, lastly, the evolution of role-playing as a learning tool and entertainment outlet, and why this is important in D&D’s leap from being just another wargame into something entirely different.

Although the book’s middle three chapters will be slow-going for some, I consider them the most important ones in the text. Peterson does a superb job of establishing the social and political context in which role-playing developed, something that is often overlooked by other attempts to document the history of the game. In the future, when scholars find themselves even further removed from the cultural atmosphere of the middle to late 20th century, it will be all too easy to miss the impact these elements played on society at large and the game in particular. Playing at the World’s chapters—especially its coverage of fantasy literature boom of the 1960s and the insular and argumentative science-fiction fan organizations of this period—will serve as an important reminder of those influences.

Having documented this important ground, Peterson then picks up the story of D&D once again and the role-playing titles that followed in its wake, culminating the book with an examination of the early efforts to take RPGs into the digital world.

Considering Peterson’s decision to cite the written historical record in his research and the sources he cites in the bibliography, I find that I simply cannot fathom the cost in both time and money he must have accrued in writing the book. Allowing that the written record of this period rests largely in small, amateur-produced fanzines and newsletters, many of which with near microscopic print runs, Peterson nevertheless ran many of them to ground in his research. Luckily for us, the reader, Playing at the World not only gives us a glimpse into the contents of some of these rarities, but Peterson also maintains a blog where he posts images culled from his sources.

In the interest of fairness, I did come across two minor errors in Peterson’s research, but both were inconsequential to the argument he proposes and small faults are a given in a book of this length.

While I believe that we’ve yet to see the definitive book on the history of role-playing (and concede that it’s likely we never will), Playing at the World comes very near to being that book and will undoubtedly serve as an important cornerstone for future attempts to document the story of Dungeon & Dragons. I unhesitatingly recommend the book to any gamer with a devoted interest in the history of wargames and role-playing games, but would dissuade casual readers—especially those lacking any exposure with the hobby at all—from choosing Playing at the World as an introduction into the sometime bizarre and incomprehensible pastime of ours.
Posted by Michael Curtis at 2:07 PM

Labels: Playing at the World, reviews

I couldn't agree more. This book is the standard reference for the topic, and will be for years to come.

I also found a couple of minor factual issues, but they were not material and in a book of this depth and length, entirely understandable and forgivable. I wonder if you and I found the same ones? :-)

@Joseph: They may very well be the same ones, but I'm loathe to point them out for fear it might detract from the overall excellent scholarship Peterson has managed with the book.

As we both point out, they are so minor and not relevant to his central argument that they can be easily forgiven,

Would you guys do me a favor and at least mail me what you think I got wrong, so I can fix it later? :)

Thanks for the very favorable review, Michael.

Jon, can you please send me an email so I can get in touch with you offline? There doesn't seem to be any contact information on your blog.

And I suppose it would help if I gave my own! greyhawkgrognard at gmail dot com.

Joseph: If you don't hear from Jon, his email is listed as "Reach me at jon at unreason com." on the Playing at the World blog.

wishlisted, and wishing a cheap but safe shipping to brazil ;)