Or how to distill crap into quality.

This past summer was pretty scattershot for me. I had a lot on my mind and on my plate, all of which caused me to try and multi-task in order to get things finished. The result: not pretty. I finally have to admit that the older I get, the more I can accomplish by focusing my energy on a single project at a time and following it through to completion. Otherwise I’m left with a slew of half-built bridges in my wake.

The result of my failure to focus was that my brain was firing off in a half-dozen directions at once and that wasn’t a pleasant experience. I’d often find myself lying in bed at night with my mind racing and sleep an elusive goal. I’m thinking of starting a meditation regime in order to learn how to still my mind once in a while. In the meantime, I’m undertaking a much needed clean-up of things and thoughts, starting with that which I can easily accomplish. I’m giving up on trying to read five books at one or rent three movies at a time when a single one will suffice. I’m also going through my storage lock-up and seeing what can be culled from there and rearrange the rest. Some of you may have already benefited from this weeding (and more may still).

That process resulted in me selling off another load of game books to my FLGS. It wasn’t nearly as large a sale as I made a year or so ago, but it did free up some space. The books I parted with were mostly a few stray 3.5 titles, some overlooked White Wolf stuff that missed the first purge, and a couple of board and card games that I knew would never be played. I accrued a little bit of store credit and was happy to be free of the excess.

Then Gen Con came and the owner returned with some new old school swag. This was followed by him buying another collection or two from other gamer looking to clear out space. Since he knows I always have an eye of for the obscure or the true old school book, he pointed out the tubs of books sitting under one of the miniature gaming tables the last time I stopped in. This visit caused the last of my store credit to vanish and me to walk out with more books.

I look at the process as game book alchemy. I’m turning splat book crap into gold at a much reduced exchange rate. A two-foot high pile of books becomes a mere 2” tall stack, but the quality is so much better. For instance, the last exchange turned The Book of Vile Darkness, Miniatures Handbook, Mage: The Ascension, Mage: The Awakening, Dead Magic, the Darkstryder Campaign boxed set, the Quo Vadis board game, and a few assorted other splats and card games into: 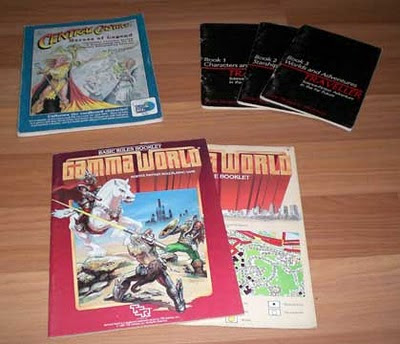 That’s a complete 2nd edition of Gamma World (minus the box but in very good if not near-mint condition), Central Casting: Heroes of Legend, and a set of the Traveller little black books (which I have never owned or played, but have been looking for for some time). Not pictured is issue #2 of the gaming magazine Gyphon (a mag I had never heard of) but features an article by M.A.R. Barker on building religions for your campaign, a Traveller “service record” sheet to use when generating a character for that game, and an article on fantasy cartography.

I had already made the decision to choose 2nd edition GW for the forthcoming campaign, but my own copy of the set was getting ragged and a replacement copy was unavailable through Noble Knight or Troll and Toad so I really lucked out on this set. The Traveller books are a little play-worn, but still holding together enough to be used to run a game (which might happen after Gamma World ends circa 2012). I’ve heard good things about Central Casting and most any Paul Jaquays’ title is worth having. I doubt this will see use as intended, but it’s already help jumpstart the imagination (much like a certain other table-filled title does).

It was all the cooler when I got that set 'cos that's where I grew up.

I for one think your choice of 2nd Ed GW's a good one.

A wonderful haul you've got there.

I acquired the Central Casting book not long ago and have had good times with it. For an example of how bizarre things can get when using Jaquays' magnum opus, you might want to check out "The Gloomspear Saga" over at my blog:

"...the older I get, the more I can accomplish by focusing my energy on a single project at a time and following it through to completion."

Lately, a resurgence of my gamer ADD has forced me to tell myself, over and over: "PICK ONE SYSTEM. STICK WITH IT. PICK ONE SETTING. STICK WITH IT." I repeat this to myself every time I find myself wanting to, say, do the Starship Warden as a one-page dungeon/wilderness project instead of focusing on the Wilderlands.

Nice!
Do you have the Central Castings Heroes of Tomorrow? I've used it many times with my Gamma World Campaigns, with just some minor tweaking.

Central Casting has always been a personal favorite. Most of my players are eager to spend the points to see what mayhem might arise from within...