It started simply enough. After the deaths of last week, the end of the game session saw the party wisely deciding to return to Rhuun to resupply and recruit new bodies. This was a move I wasn’t expecting. The town part of the campaign still remains a nebulous place as I try to create all the little nuances that a settlement needs before it can become a living, breathing place in the minds of the players. I’ve had a tendancy to gloss over town time in order to get back to the dungeon. However, this is one of the things in my “Needs to be improved on” category on my mental referee’s checklist. One way or another, I vowed, this trip to town would be different. But how?

On Wednesday, I took a trip down to the FLGS to see if they had anything in the used D&D section that might help jumpstart the creative process. In the box of old modules, I came across a complete copy of B6 – The Veiled Society by Dave Cook. By complete, I mean that all the paper models and cardstock miniatures were present. Remembering that the module was one of the first “city adventures” for D&D, I bought it on the off-chance that parts of it were adaptable/salvageable for my own campaign.

As much as I hate to say it (which is a lot considering the author was kind enough to write the foreword to my book), the module doesn’t age well and the mystery it contains is a little thin. This is not surprising since this was one of those “Basic D&D” modules aimed at a younger demographic from back when TSR really started focusing on the tween market. Since then, town-based adventures have come a long way and B6 unfortunately gets left in the dust.

However, there was an encounter in the module that introduces the basic premise of the adventure—rival families at one another’s throats as they contend for power—which served my purposes well and I decided to adapt it and put a little spin on it to make it my own. But it was the paper models that were included in the module that really got my mind going.

Like the module itself, paper and cardstock models, miniatures, and terrain have greatly improved since 1984. A sizeable portion of RPGNow.com’s catalogue is dedicated to these products, and companies like Fat Dragon Games makes PDF versions of models that blow the doors off of the easily-destroyed cutout buildings of yesteryear. And since I live in an age where such things are easily downloadable, I decided to be true to the module’s original intentions—give the players some eye candy to gawk at—and include some cardstock buildings of my own.

When the players arrived on Sunday, the most commonly asked question was: “Are we playing a new game?” An understandable question, considering this is what they found waiting for them on our big blue table. 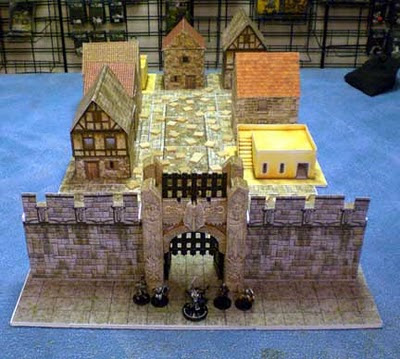 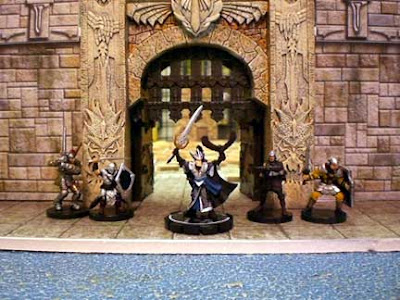 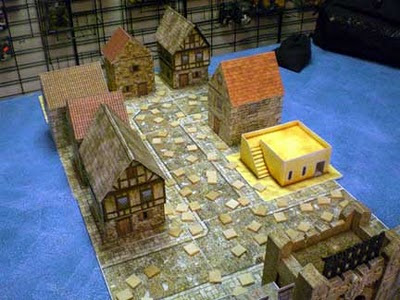 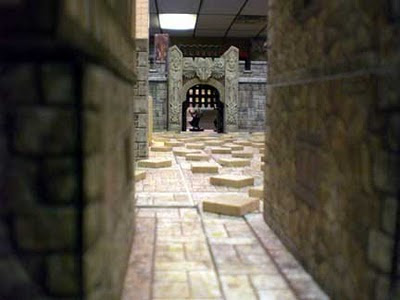 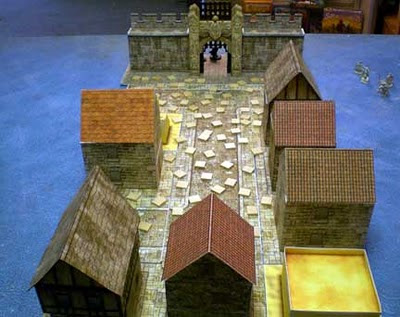 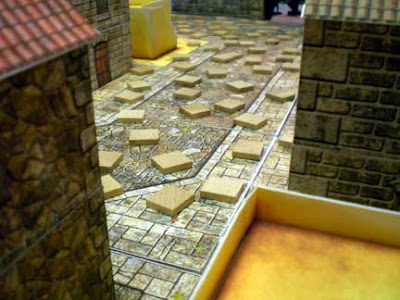 Pictured is the Street of the Cobra during the Festival of Erion. Those Scrabble tiles are celebrants, fire-eaters, dancing girls, acrobats, and musicians. It was a crowded festival—until the draft lizard went berserk and started to run amuck in the street! (I should mention I watched a Godzilla flick this week, which might have also had something to do with my decision to use model buildings and then sett a big lizard loose to run wild amongst them).
Would I do this every time the party goes to town? Absolutely not (sorry you missed it, Rob), but it was a fun way to reinforce the notion that, while I may not be the greatest referee to ever sit behind the screen, I have evolved my own ways of presenting the game world and entertaining my players—ones which I hope are appreciated by anyone who joins me at the table.
Posted by Michael Curtis at 9:01 AM

That is AWESOME! Nicely done. :D

I have a bunch of paper model buildings built, but haven't had a chance to use them in a game yet.

I'm really impressed by the Gate and the street tiles - that really ties everything together nicely. :)

What sets did you use for that? What kind of paper/cardstock did you print them on? They look great and using Scrabble tiles for the crowd was inspired.

Wow,my players are happy when I have a bag of chips for them...much less an entire cardboard village!

I used Barnacus: City in Peril from an old Dragon magazine much the same way you did B6, and it worked great for my sandbox...

Absolutely fantastic! I have always wanted to bring more 'models' into my RPGs... and the scrabble tiles as celebrants is a nice touch. Did the letters on the tiles have any significance --- say, if the players passed by the 'letter X' (who just looked like another drunken reveler), would something special happen?

What sets did you use for that? What kind of paper/cardstock did you print them on ?

Mot of the buildings, the town wall, and the street tiles are all from Fat Dragon Games' Dragonshire Deluxe set and their Borderlands Keep set. The two yellow Mahgreb-style buildings is from another company's Desert Village set (I've described the architecture of Rhuun as being mostly in this style, so I had to include at least a few buildings that weren't western European in construction).

The gate house is a Mage Knight piece that's actually a real plastic building, not cardstock. My FLGS has a ton of these on overstock and is trying to get rid of them, so I picked it up dirt cheap when I finally got tired of folding and gluing paper. The cardstock is the standard 110 lb. stuff you can find anywhere.

Did the letters on the tiles have any significance?

I left them blank side up because I just needed something to stand in for the crowd. I debated using them letter-side up and using the letter as the townsperson's name if they got stopped, but that's as far as it went. Although there were jokes that, with the tiles face-down, I had concocted some evil Minesweeper-style scenario to run the PCs through--which is something I'll have to remember.

Check out these FREE really cool paper minis.
Best of all they have peasants!

They are working on many many more models every week.