I’ve been dwelling on dreams these last few days (as opposed to dwelling in dreams, which is another tale to tell). The height of summer always places me in a melancholy frame of mind as I begin to long for the crisp nights, fading hues, and misted-haunted days of autumn. Such melancholies naturally attract thoughts of the ephemeral nature of our nightly sojourns. Or perhaps it’s solely that I’ve not gotten enough sleep this past week.

In some respects, this most recent of my mental bugaboos is unwelcome. As the gleaming light that is the Stonehell compilation’s end of the tunnel begins to grow, I was looking forward to respite from working on the creativity loom and at the Keyboard That Knows No Mercy. But Calliope is a wanton and I have difficulty saying “No” to a beautiful woman. (I’m assuming it is Calliope. The ancient Greeks didn’t have a specific Muse for role-playing games as far as I’m aware.)

I am not a gifted sleeping dreamer, although I do well as an awake one. I bear a great jealousy of those who dream deeply and have the talent for retrieving artifacts from their nocturnal journeys and bringing them back to the waking world. Like a great many people, all I manage to return with are gossamer fragments that quickly dissolve under the rays of the sun. What few relics I do manage to salvage from beyond the walls of sleep I treasure greatly. The opportunity to revel in dreams (even carefully crafted artificial ones) at the gaming table holds great appeal to me. 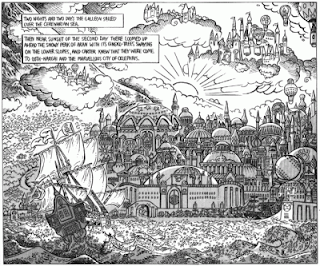 The idea that I’m turning over in my head bears little resemblance to the ones that have been keeping my company over the last year and a half. It has little in the way of dismal dungeon corridors, vicious traps, and animated decorations dooming adventurers to grisly demises. It draws from a much purer well of creative waters that burble up from assorted mental catch basins. The Dream Quest of Unknown Kadath, Neil Gaiman’s The Sandman, Leiber’s Lankhmar, King’s The Dark Tower, the sword and planet genre, and the desire to play with scores of random tables and fiddly bits have all leaked into that well. I want to use the B/X rule set as the bucket from which to draw from that cistern, seeing what leaks out and what remains once I pull it up.

Like many of my ideas, I’m uncertain if this one will grow to stand on legs of its own or die a crib death. Fittingly, the germ of this concept came to me in the night hours, but I’ve found that a great many grand schemes birthed during that time seem to lose their luster once the sun rises. I intend to husband this idea and protect it as best I can at first, waiting to see if it can stand the blast of the reality winds. If it begins to germinate, I may show little glimpses of it here once I deem them suitable. In all honesty, however, this is a vanity project – one that touches more on what I find interesting than what I think other might enjoy. I’ll understand if it’s not to everyone’s liking – a possible sober reality that could also impact getting people to join me as players in my little oasis of dreams.

As a beginning point, I’ve been thumbing through my copy of H.P. Lovecraft’s Dreamlands. While there is not a lot in that book that I predict will ultimately be suitable from my little side project, there is very little else in my personal role-playing collection that could serve as creative fodder. I predict much of what is to come is going to be liberated from less game-centric sources or fashioned from my own not-quite-lucid dreams. I’m lacking a definitive name for the project at the moment (hardly surprising for me) so, for lack of better term, I’ll refer to it as “Insomnity.” Future posts regarding this project, should it begin to bloom, will bear that tag.

Although I could maintain that my primary motivation in spinning this idea on my creative potter’s wheel is to fabricate my own distinct contribution to the hobby in general and the OSR in specific, one that supports the argument that role-playing games can be much more than indulgent displays of wanton violence and the looting of the dead, this would not be the whole truth. Part of me really just wants to explore a world where an octopus could make a living as a bazaar merchant or a place where mystic-minded yetis are the central cabal behind a mummy smuggling ring. Encounter Critical comes close to the place I seek, but we diverge at certain places along the path. My trail wanders through some much darker thickets. You’re free to take my hand and come along on that walk, if you’re so inclined.

Until next, pleasant dreams.
Posted by Michael Curtis at 9:01 AM

I encourage you to work on such stuff. :D

Looking forward to it! (More details on "Insomnity," that is - not the holding of hands. :P)

I've been hearing whispered croonings from sword & planet themes as well. I recommend you indulge, and look forward to seeing what you refine from the raw nuggets of your dreams.

You had me at, "Part of me really just wants to explore a world where an octopus could make a living as a bazaar merchant or a place where mystic-minded yetis are the central cabal behind a mummy smuggling ring."

As for sources of inspiration, you might want to check out The Book of Weird, aka The Glass Harmonica if you haven't already.

If you're just shooting for a surreal, dreamlike setting, you may be on your own, but if you need a game where dreams themselves are important, you might be able to take ideas from a couple games. JAGS Wonderland (more info here) is one of the most unique and intriguing RPG settings I've seen in a long time; it's meant to be used with the JAGS system, but I'd ditch that myself. There have been a couple other "playing in the world of dreams or illusion" RPGs, mostly in the Game Chef/24 Hour RPG competitions; I've even done it a couple times myself, starting with The Court of 9 Chambers (surrealist artists who fight each other in their dreams with artistic motifs) and most recently with Out of Frame (slightly-amnesiac people in a Dark City-esque world find that the world seems slightly unreal and life has a plot -- but they can change it, with luck and determination.) If you need some kind of reality-bending dream mechanics to wrap around a pseudo-Kadathian surreal setting of your own design, you're certainly welcome to raid my OoF game fore ideas on that.

I'd either say Thalia (Comedic Theatre) for most games, but the occasional TPK should be dedicated to Melpomene, the muse of tragedy.

As for sources of inspiration, you might want to check out The Book of Weird, aka The Glass Harmonica if you haven't already.

Noted. Thank's for the suggestion. It will go on the list.

The title of this post, by the way, comes from a song by the unlikly named band Rudimentary Peni. They did an entire album "Cacophany" of songs based on the writings of Lovecraft and Poe. The song quotes in the post's title is "Dream City."

I've yet to venture into the darkest of the dream thickets but some ideas came to me tonight as I was, appropriately enough, driving through a storm.